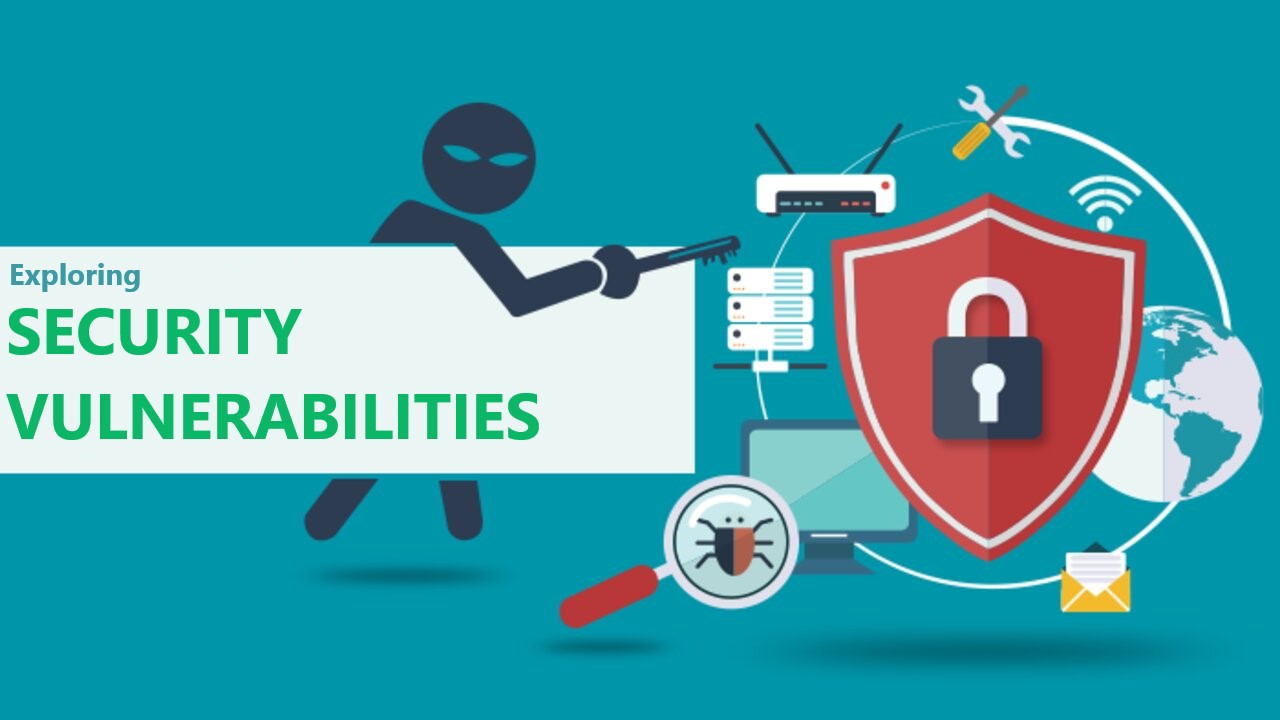 Top 10 Important Security Vulnerabilities You Need To Watch Out For

The Internet has progressed a lot and so have the security vulnerabilities causing minor to major cyber threats at every step. More devices are connected to the internet than ever before making it very easy for the attackers or hackers. They make complete use of the machines such as cameras and printers that had never been designed to fend off the sophisticated invasions. This has led the companies to consider and rethink about their safety and the safety of the networks.

What Is A Security Vulnerability?

Mistakes occur and they are inevitable even in the process of building and coding technology. These mistakes leave behind a certain residue that is commonly referred to as a bug. The bugs are not essentially harmful except to the potential performance of the technology. However, many of the bugs can be taken advantage of if the nefarious actors wish to. These bugs are known as security vulnerabilities.

In the generalized sense, a vulnerability scanner is responsible to scan and compare your environment against a vulnerability database or a list of the known vulnerabilities. The more information the scanner possesses, the more accurate will be its performance. As soon as a team has a report of the cyber security vulnerabilities, the developers might go ahead and use the penetration testing as a means to check whether the location of the weaknesses. This will help them to fix the problem and they can easily avoid future mistakes. When you are employing frequent and consistent scanning, you will be able to see the common threads between the vulnerabilities for a better understanding of the complete system.

What Are The Types Of Security Vulnerabilities?

Human element is the weakest link in most of the cybersecurity architectures. The errors of the users can easily expose the sensitive data, create the exploitable access points for the attackers or even disrupt the systems.

These are concerns with the hardware or software of a network that exposes it to the possible intrusion by an outsider. The examples of this include insecure Wi-Fi access points and the inadequately configured firewalls.

OS vulnerabilities are a kind of vulnerabilities within a particular operating system that the hackers might exploit for gaining access to an asset where the OS is installed on or even to cause damage. Examples of this kind of windows security vulnerabilities include the default superuser accounts that might exist in some OS installs and the hidden backdoor programs.

Some of the vulnerabilities can be created by specific process controls or a lack thereof. One of the examples would be the utilization of the weak passwords that might also fall under the human vulnerabilities.

10 Crucial Cyber Security Vulnerabilities You Must Be Aware Of

It is one of the most common security vulnerabilities. Injection takes place when a hacker exploits insecure code for inserting or injecting their own code into the program. As the program is unable to determine the code that is inserted in this way from its own code, the attackers can use the injection attacks for accessing the secure areas and the confidential information posing to be trusted users. The examples of injection are SQL injections, CRLF injections, LDAP injections and command injections.

The application security testing is capable of revealing the injection flaws and suggest several remediation techniques that includes stripping the special characters from the user input or writing the parameterized SQL queries.

The session management calls and the incorrectly implemented authentication can pose a heavy security risk. If the attackers notice all of these vulnerabilities, they might be able to easily assume the identities of the legitimate users.

One of the most effective ways to mitigate the broken authentication is multifactor authentication. You need to implement the SCA and DAST scans for detecting and removing issues with the implementation errors prior to the deployment of the code.

The APIs that permit the developers to connect their applications to other third-party services such as Google Maps are great for saving your time. Nevertheless, some APIs depend on the insecure data transmission methods that the attackers can exploit easily for gaining access to the passwords, usernames and several other sensitive information.

XML External Entities risk occurs when the hackers are able to upload or even include the hostile XML content owing to insecure code, dependencies or integrations. An SCA scan is able to find the risks in the third-party components with the known vulnerabilities and furthermore warns you about them. Disabling the XML external entity processing also minimizes the likelihood of an XML entity attack.

If the access restriction and the authentication control are not properly implemented, then it becomes easier for the malicious hackers to take whatever they wish. With the broken access control flaws, the unauthorized or unauthenticated users might possess access to the sensitive files and systems or even the user privilege settings.

The insecure access control practices and the configuration errors are pretty hard to detect owing to the fact that the automated processes cannot always test for them. In this scenario, the penetration testing will be able to detect the missing authentication, but you have to make sure that other methods are also used in order to determine the configuration issues. Issues with the credentials management and weak access controls can be prevented with the secure coding practices as well as utilizing several preventive measures such as locking down the administrative accounts and controls. Additionally, using multifactor authentication is also crucial.

Similar to the misconfigured access controls, even more general security configuration faults possess huge risks as the attackers achieve quick and easy access to the sensitive data and the site areas. Dynamic testing is very helpful in this and lets you discover the misconfigured security in your application.

With the aid of the cross-site ing (XSS), the attackers can take advantage of the DOM manipulation and APIs for retrieving data from or even sending commands to your application. The cross-site ing broadens the attack surface for the threat actors permitting them to hijack the user accounts, control browsers remotely, access the browser histories, spread worms and trojans and much more.

A Cross-Site Request Forgery (CSRF) focuses on tricking an authenticated user into performing an action that they usually do not intend to do. This when paired with the social engineering is able to deceive the users into accidentally offering a malicious actor with the personal data.

Training your developers the best practices like input validation and data encoding will reduce the likelihood of this risk. Additionally, you need to sanitize your data by validating that it is the content you would expect for that particular field. You will also need to encode it for the “endpoint” as an extra layer of protection.

Deserialization, meaning retrieving the data and objects that have been written to the disks or saved somewhere can be used for remotely executing code in your application or as a door to further attacks. The format in which an object is serialized into is either binary text or structured via the common serialization systems such as XML and JSON. This flaw happens when an attacker makes use of the untrusted data for manipulating an application, executes unpredictable code or  initiates a denial of service (DoS) attack for changing the behavior of the application.

Although deserialization is much difficult to exploit, use of the application tools and penetration testing can reduce further risk. Additionally, never accept serialized objects from any untrusted sources and never use methods that solely permits the primitive data types.

Irrespective of how secure your own code is, the attackers can exploit the APIs, dependencies and the other third-party components if they are not secure themselves.

A static analysis in addition to a software composition analysis can also locate and aid in neutralization of the insecure elements in your application.

Failing to log the attacks or errors and poor monitoring practices can also introduce a human element to cybersecurity vulnerabilities. The threat actors count on the lack of monitoring and slower remediation times so that they can carry out their attacks prior to you notice or react.

For preventing the issues with the inadequate logging and monitoring, you need to make sure that all the access failures, login failures and the server-side input validation failures are logged with the context so that you will be able to identify the suspicious activity. In this case, pentesting is a great way to find the areas of your application with inadequate logging as well. Additionally, establishing effective monitoring practices are also essential.

How Is An Exploit And Threat Different From Cybersecurity Vulnerabilities?

Exploitation is the next step in the playbook of an attacker after they discover a vulnerability. The exploits are the means via which a vulnerability can be leveraged for malicious activity by the hackers. These consist of the pieces of software, open-source exploit kits or even the sequences of commands.

A threat usually refers to the hypothetical situation where the malicious hackers uses the vulnerability. It self, the threat will normally possess an involved exploit this is a common way the hackers make their move. A hacker might use multiple exploits at the same time after they have assessed what will fetch them most rewards. At this stage, nothing disastrous happens. However, it can offer an individual or team an insight into whether or not an action plan requires to be made based on the specific security measure. On detecting security flaws, you need to conduct vulnerability assessment at the earliest.

What Are Database Security Vulnerabilities?

Database security vulnerabilities refer to the flaws in the databases causing the databases to become vulnerable to the various security threats. Database security is very crucial for the protection of sensitive and valuable data. It keeps the data safe from unauthorized updates, abuse and unauthorized access. Database vulnerabilities might occur owing to the insider threats and human error. Harm from the data breaches on your business relies on the compromised intellectual property such as the inventions and the trade secrets, non-compliance fines and penalties, brand reputation damage, customer notification costs and the breach repair.

The hackers locate and target several vulnerabilities including the database management software. The vendors of the database software offer security patches to handle all of these vulnerabilities. However, failure to implement this within the time increases the exposure.

Security controls are the safeguards or the countermeasures that are used to diminish the chances of a threat exploiting vulnerabilities. However, the act of minimizing the risk is also called the risk mitigation. Thus, it can be said that risk mitigation can be achieved by implementing various kinds of security controls depending on certain factors.

These are just a couple of the most important security vulnerabilities that your business might be exposed to at any given time. If you think you do not have much knowledge, then you can contact one of the top cybersecurity companies that will help you in all possible ways for the long period.